Crown of Thorns..Is it Your Story? 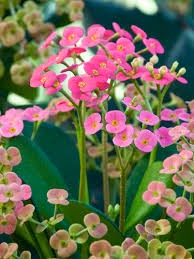 This is a true story. It is also a version of our own stories, but first, the story.

My mother, Celia had a friend named Laura, who lived a few blocks away in Friendly Village, Manchester, NY. Laura’s deepening illness took her first to the hospital, and then to a nursing home. Laura never came back to her home again.

Celia and a few friends were hired by Laura’s lawyer to help prepare the house for sale. Laura had been away from the house for seven months, so the air was stale and dust was everywhere. The lawyer had provided a dumpster, so that the women could discard all the things that had no obvious value.

On an accent table in the corner of the living room was a pot with dried soil and in the soil what looked like a stick. Celia took the pot outside, but couldn’t make herself throw it into the dumpster. First she set in on the ground next to the dumpster. A few days later, she picked it up and put it on a table on the patio. Then she put it in her car. Celia didn’t know what this plant was, but it had taken hold of her and she couldn’t heave it away.

With  biblical care, she placed it in her living room where the bright morning sun could warm it. She watered it, and yes, talked to it. The stick  began to enlarge as water flowed through its length. Eventually, bright green leaves appeared and tiny pink flowers. The plant was … a crown of thorns. The year the crown of thorns came from Laura’s home to Celia’s was 1986.  Now, 27 years later, it thrives at a friend’s home, bright with flowers and stands almost seven feet tall.

You can probably see a variety of ways the story of the crown of thorns is your story as well. I certainly do.

Have we been neglected, unwatered. Have we been left to die? What God-figure has taken us home, watered us, talked with us, placed us in bright sunshine? Have we grown seven feet tall?  Have we been Celia for others?

~Joan Sobala, SSJ
Posted by The Sisters of Saint Joseph at 7:38 AM No comments: