Courage in the Face of Paris Attacks 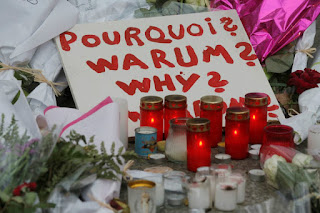 Friday the 13th was one of France’s worst days in recent memory. Lives of ordinary people were brutally snuffed out as chaos overtook the streets of Paris.  Once again, terrorists killed their fellow human beings in the name of a misguided ideal. The people who survived the hostility of that night could have only experienced numbness, shock, emptiness, helplessness. We live in calamitous times.

The misery of World War II caused  the French to wonder where  God was in the midst of all the senseless killing of the war, if they thought  of God at all. That led French philosophers to eventually pose the question “Is God Dead?” Was God dead? Is God dead, now?

The short answer, of course, is “No.” The long answer requires that the French and all of us tap the deepest understandings available to us when our lives collapse in some way, when we are confronted with  violence in our physical and political worlds, and experience  hostility among cultures and races.

People like us from other times and places who also came to the limits of their resources, teach us how to face our crises as individuals and as a people. The Book of Daniel speaks to the Jewish people fighting for their very survival. The Gospel of Mark comes out of another time of crisis, some 30 years after Christ’s Resurrection. Jerusalem was then under foreign domination and the familiar was being swept away.

Today, two thoughts gleaned from Daniel and Mark help us take courage as a world in the face of ISIS:
·
In the throes of crisis, things are not always as they appear.
God is not dead. We are not abandoned. God has not lost control. In fact, God goes before us, surrounds us, offers us the freedom to shape life even as others misuse their freedom to destroy life. Disaster is immediately recognized for what it is. It is harder to frame that disaster in the hope God offers us.

·         It is only as a community that we come through the disasters of life.
Day-to-day, we may think of ourselves as independent, self-sustaining and capable
of working out the dimensions of our lives by ourselves. But we aren’t and we can’t be.
Watching the news from these days after the Paris massacres, we see people coming together, offering tokens of solidarity, not only on the streets of Paris but across the world.  Vigils intertwine people’s grief and the prayer that arises within them. Buildings, lighted with the French colors, illuminate the nighttime skies. These  symbols  are more than comforting.  They bespeak the determination of people to choose life.

Disaster is not the mother of despair, unless we let it be so. Deep down, the French know this. We know this. Hope sustains us in the most arduous times. . As the French  poet, Charles Peguy, wrote in God Speaks. “If it weren’t for hope, all would be nothing more than a cemetery .”

Posted by The Sisters of Saint Joseph at 8:03 AM No comments: