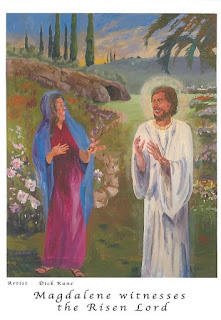 Dear Friends,
We know her, but we don’t know her. I mean Mary Magdalene, whose feast we celebrate in a new way this coming Friday, throughout the church.
Luke alone tells us that Mary of Magdala was first among women to follow Jesus during His public ministry and that He, Jesus had restored her to strength and fullness (8.1-2): “Accompanying Jesus were the Twelve and some women who had been cured of evil spirits and infirmities [including] Mary of Magdala from whom seven demons had gone out…”
In Gospel times, to identify someone as being “of” a certain place was not to emphasize a specific location but it was a way of identifying a person with reverence within a community. This Mary: Mary of Magdala, and no other. Twelve times in the Gospel accounts, Mary of Magdala is named exactly that way. Moreover, placement in a list of names, in biblical times was significant. Mary Magdalene is always named first in a list of women present at the death and burial of Jesus and at the empty tomb.
Nowhere in Scripture is she ever called a prostitute. Her very clear place in the community got conflated in subsequent centuries with the nameless women who anointed Jesus with oil or were identified as prostitutes. Pope Gregory the Great (540-604) was notable in his designation of Mary Magdalene as a public reformed sinner. The image stuck for centuries. She became a wanton woman in need of repentance and a life of hidden and silent penitence. Gone was the revered title “Apostle to the Apostles", given to her perhaps as early as the third century by Hippolytus. Enter Mary Magdalene of Jesus Christ Superstar and The Last Temptation of Christ.
Even though Mary of Magdala was at the cross and burial, these alone would not be sufficient to elicit the great regard the early church had for her. Most importantly, she was venerated as the first witness of the Resurrection the first to see the Risen Christ in the Gospel of John.
There in the garden, on the morning of that first day of the week, Mary lingered after Peter and John had departed without seeing Him. She wept and she did not recognize Jesus until He spoke her name: Mary: That Mary recognized the voice of Jesus calling her underscores that Mary is a true disciple. She then went, at Jesus' command, to tell the others that He was alive.
“I have seen the Lord” she told them, long before Paul used those words “I have seen the Lord” to confirm his own discipleship.
The witness of Mary to the Resurrection was so clearly accepted by the early Church that it could not be dislodged as the Gospel texts were being framed. Who would have thought that God would want the primary witness of a woman to such a defining moment of faith?
As of July 22 -- this Friday -- the whole church will celebrate the feast of Mary Magdalene, Apostle to the Apostles, not as an obligatory memorial but with a status equivalent to the feasts of some other Apostles. Our congregation invites you, and others you may choose to bring with you, to our Motherhouse for our 11:30 am Mass for this historic, joyous  celebration of the restored recognition of Mary Magdalene as Apostle to the Apostles.

Posted by The Sisters of Saint Joseph at 6:40 AM No comments: