Prisoners of Our Own Minds 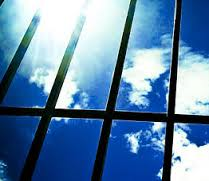 
Harry Houdini, the illusionist, claimed he could get out of any prison in an hour or less, but no one was to watch him. A small city in England had invited Houdini to come and break out of their new, state of the art prison. On the appointed day, Houdini, nattily dressed for the event, came. Harry entered the prison, the locksmith closed the lock and all withdrew.


From his clothes, Houdini took out his concealed instruments as he set to work. An hour went by. The people waited outside. Two hours went by. Nothing happened.


Stunned and demoralized, Houdini leaned against the locked gate. It opened under his touch. The townspeople had played a trick on the trickster Houdini. They had never locked the gate.


Houdini, in fact, had not been locked in. He was a prisoner only in his own mind.


How are we like Houdini- prisoners held by a certain way of thinking, prisoners in our own minds?


The biblical moment that comes to mind in which the disciples are like Houdini is when they are locked away in the upper room on the evening of the third day after Jesus’  death on the cross (John 20.19.)


They were fearful. What would happen to them if they leaned on the door, stepped out beyond it?


Thank God that Jesus could penetrate their self-imposed imprisonment. He stood in their midst and did not offer them a dressing down for their desertion, for that would have been unworthy of Jesus. It would have driven the disciples deeper into the prison of their minds.


Instead, Jesus offered them the peace that unlocked the door so they could step out into what would become a fruitful discipleship in their needy world.


You and I can be enslaved by greed, self-centeredness, so many subtle dictates we allow to be imposed on us. We can stay there, or we can move out from behind locked doors to the freedom of the sons and daughters of God. The move from imprisonment to freedom is a lifelong work of the mind, heart and spirit.
~Sister Joan Sobala
Posted by The Sisters of Saint Joseph at 6:06 AM No comments: