The True Meaning of Greatness 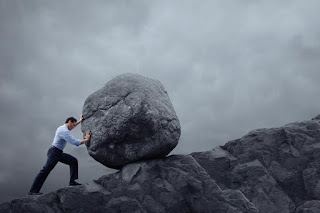 Over lunch recently, my friend, Maria, regaled me with stories from her 50th high school reunion. The prophecies produced in their senior year had been found. The text, which had remained unattended to in someone’s attic for all those years, was now reviewed for all to hear. The class, as a whole, was slated for a tremendous future. There would be executives, professor, stars, renowned scientists and great entrepreneurs.

The recounting was funny, but if the truth be known, the prophecies would not even have been what Maria and her classmates wanted for themselves. Their experience – and ours – is probably closer to that of Jesus in today’s Gospel. Like Jesus, Maria, you and I have had to endure the typical hometown response “What? Oh! That’s only Bill, Sue, Carol, Tim, Maria. Nothing special!”

What is greatness anyway? And who decides what constitutes greatness? Is it having prestige, authority, lots of money? Is it being number one, no matter what it takes to get there? Society would say: Go for it!

But Jesus never said these were the important things in life. Jesus said: the person who wishes to be great ought to be willing to serve the rest. In other words, if you want to be first, be willing to be last. In Jesus’ eyes, the person who achieves greatness is the one who stands with the poor, the stranger, the outcast, the immigrant, the lonely.

Listen to what Mahatma Gandhi says of greatness: “It is not the critic who counts, nor the individual who points out how the strong person stumbles, or where the doer of deeds could have done better. The credit belongs to the one who is actually on the arena; whose face is marred by sweat and dust, who strives valiantly, who errs and may fall again, because there is no effort without error or shortcoming, but who actually does strive to do the deeds; who does know great enthusiasm, great devotion; who spends oneself in a worthy cause; who at best knows in the end the triumph of great achievement and at worst, if failing at least fails while daring greatly, so that this person’s place shall never be with those cold and timid souls who know neither victory or defeat.”

Paul in today’s second reading also speaks words to which we can relate. “Three times I begged the Lord to take this cross from me, each time God replied, ‘My grace is sufficient for you.’” Paul, with his ever-present companion God, came to realize that “When I am powerless, then I am strong.”

The power of the weak makes sense only in the God context. Jesus knew this. O did Paul. I hope we do, too. Together, let’s encourage one another not to be afraid to hear God’s Word, then speak it to a needy world.

~Sister Joan Sobala
Posted by The Sisters of Saint Joseph at 10:04 AM No comments: