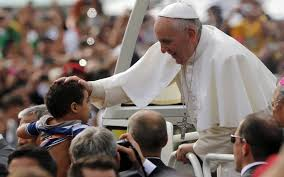 
The 14th World Youth Day in Krakow, Poland and the Democratic and Republican Parties conventions are over. Americans, by and large, know more about the conventions than World Youth Day, if not by watching them, then by media summaries and vignettes. All were high energy events, with chanting, witness talks, soaking up the auras of the public figures who were highlighting the events. God was in the mix, too, as only God can be.


All three have to do with shaping the future, building character, defining values and embracing them.


They have to do with subtly, rightly or wrongly convincing people that what these groups espouse is good for the world and good for communities and for individuals.


But life and death went on as these groups met. In Japan, a man attacked residents of the Tsukui Yamayurien home for the  disabled, killing 19, and at the Church of Sainte-Etienne du Rouvray near Rouen, France, 85-year-old Father Jacques Hamel died at the hands of assassins while saying morning Mass. Other mass killings around the world fill out the month of July. Marriages and births took place.


On any day, good and evil clash. Conflicting values vie for the hearts and minds of people. Faced with evil in its blatant and subtle forms, people retreat into fear, or choose masked evil because it seems to offer them security. Evil entices us as a perceived good. How do we know the difference?


Convention delegates, world youth, you and I need to think through with our various communities (not just by ourselves) the needs of our time and our part of the world. What do others need from us? We will find the personal resources to do what we must. The danger is that we choose not to know what is needed and that we ignore the call and depend on our own best (or pre-decided) thinking. That’s it really. What we need to do doesn’t arise in us. It is received as a call from a world in which the love, joy, peace of Jesus all exist, but are held captive, contained – not set free.


The first work of convention delegates, world youth, you and me is to listen to the deepest needs of hurting people. Listen. It’s easier to just put on a band aid.  Don’t. Instead, step into the work of helping others through their rough patches. Open doors and computers. Help people make connections that will enable life to spring forth. Treat all you meet with respect, even the one who comes to hurt you. “Violence happens when suffering has nowhere else to go.” (Parker Palmer) The work underscored by World Youth Day and the American political conventions is before us.
~ Sister Joan Sobala
Posted by The Sisters of Saint Joseph at 6:37 AM No comments: