Today, rather than one more or less coherent little essay, I offer you sips of Easter to savor through the day or week. The sips of Easter are from others who, in gazing upon the Risen Lord, were moved to words – people who throughout history have used every medium of communication to say “I have  savored, adored, discovered, was touched to the quick by Jesus the Risen Lord.”

~Keep watch then, brothers and sisters… for the morning of that day which has no sunset has already shone upon us. (Guerric of Igny  c. 1150)

~Let all then enter the joy of the Lord! Both the first and the last and those who come after… Rich and poor, dance with one another, sober and slothful, celebrate the day. Those who have kept the fast and those who have not, rejoice today for the table is richly spread… Let no one go away hungry. All of you, enjoy the banquet of faith… Christ is risen, and life is set free. (Easter Sermon of John  Chrysostom )

~From an anonymous correspondent who sent this to Bishop Joseph L. Hogan of Rochester who then made it famous by circulating it in the diocese: “Who rolled back the stone? You did, when you laughed, cried, shared, trusted me… When you let me help you, hold you… When you could have said no but said yes instead… when you listened, smiled, and let me keep my dignity… when confusion, loneliness, disappointments came crashing in and there you were...When you gently called me to prayer, to celebrate life, to sing, to dance, to risk, to love. Then the stone rolled away. When you said I care, I love you, I need you, I’m sorry, I forgive you…then the stone rolled away. New life, spring, warmth, life, freedom were born. The resurrection became Reality. (Bishop of Rochester 1969-1978)

~Cartoon: Which came first the bunny or the egg? Neither, they are both made of chocolate. Caveman walks away, trips, slides down a hill, hits his head on a tree. Groggily, he notices a sign with an arrow. The word on the sign is TOMB. Caveman finds the tomb, goes in, comes out scratching his head saying to himself “Life’s greatest discoveries seldom occur without pain.” (B.C. by Mastroianni and Hart)

~The Jesus of Easter is the Completer of unfinished people with unfinished work in unfinished times. (Lona Fowler)

~The Resurrection is not a crutch. It does not allow us to excuse the killing of an innocent teenager or the conduct of a war that seems not to be headed toward some just resolution. The Resurrection, rather, is the reason to hold on to our hope. (Mark Hare)

~May the God who shakes heaven and earth, whom death could not contain, who lives to disturb and heal us, bless you with power to go forth and proclaim the gospel. Amen (Janet  Morley)

~ Sister Joan Sobala
Posted by The Sisters of Saint Joseph at 12:27 PM No comments: 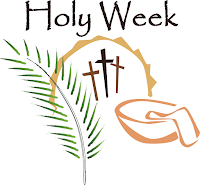 Holy Week, among other things, is about resistance – the refusal to accept, be part of, grasp and take in whatever is set forth as necessary, irrefutable and absorbing.

Jesus was a resistor.

Others involved in the event of these days marshaled resistance as well. Judas resisted the new, unexpected way that Jesus offered people salvation. He wanted Jesus to savior his way. Peter resisted Jesus who knelt to wash Peter’s feet. Later, Peter resisted his conscience and the loyalty Jesus inspired in him. The women in their vigil at the cross and at the tomb resisted the threat of the Roman military and the jibes of the crowd.

Resistance either comes from faith or it does not. When it does not come from faith, as we see in this week’s drama, it disappears into cowardice, shrinks from the inside and leaves failure in its trail. Such resistance obscures the likeness of God in the resistor and offers no spark to ignite the world.

But resistance that comes from faith leads to new life, a renewed confidence in God and Easter itself. Jesus’ cry on the cross shattered the last human resistance – death – forever. On Easter, the resistance of the stone, the inability of Jesus’ disciples to recognize him, and most of all, the resistance called fear gave way to lasting, indescribable joy.

In our world, this Holy Week and Easter, we find all these same resistances played out. Some US citizens resisting self-centeredness, yet others resisting truth. Worldwide, medical workers resist epidemics and at the same time regimes resist being overthrown. Signs of resistance are everywhere. It’s often hard to sort out their meaning. That’s why we need Easter, for when Christ Easters in us and in our world, we recognize the good to embrace and the evil to reject. Boundaries become permeable, resistance gives way to harmony, we become participants in a community working for the common good.

As Holy Week unfolds, I hope we can resist being bystanders only in an ancient drama, bystanders, who in their lack of concern for others, “leave no fingerprints on what their hands have touched.” (Charles Wright)

This week, do not resist Christ. Touch Him in his Passion, Death and Resurrection. Touch one another with the encouragement of faith. Touch the empty tomb. Touch the spring flowers that proclaim He is risen.

~ Sister Joan Sobala
Posted by The Sisters of Saint Joseph at 7:15 AM No comments: