Following the Word of God 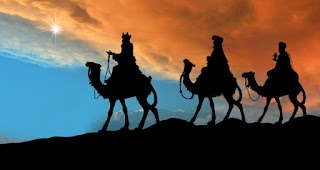 We know the key figures in the Epiphany: the Holy Family, the wise men and Herod. Don’t leave out Herod, for he represents darkness in the story. Herod is the counterpoint to the others and helps us understand the difference between self-serving power and cooperation with God.

This Herod, one of several to bear that name in the Gospels, knew from the wise men and from his own priests and scholars the ancient prophecies about the long-awaited savior who would come to set God’s people free. Instead of seeing this as a moment of grace and redemption for his people, Herod found the Newborn to be a threat, fearing that the Holy One who had come would now unseat him. In his rage, Herod massacred the children under two years of age who lived in the area. Great sorrow was in the land, but Herod didn’t care.

Mary, Joseph and the wise men, on the other hand, had been attentive to the Word of God that came to them through messengers and dreams. They listened and they obeyed. They made a decisive response to the invitation of God. There was no law given for them to obey. Rather, it was what they heard in the depth of their being that moved them to do what was being asked of them. They heard and obeyed.

Obedience is not a popular term today. We Americans don’t like to be told “Do this. Don’t do that.” This is a caricature of obedience. We say we prefer dialogue, thank you, and then prefer to be left alone, each of us to our own opinion. After all, we argue, adult self-direction is best. But in this Epiphany account, we are given a new way to understand how compelling obedience really is. The wise men had their dream. So did Joseph. The messages they were given were unenforceable. No one made them act, but they all knew what they needed to do and they…did…it.

We are invited by the story to be obedient as Mary, Joseph and the wise men were, and Herod was not. Without benefit of a law, we know that, at times, we must do something…to act in some hitherto unexpected, life-giving way. No one else knows it. It’s unenforceable, but we know and we have a choice. Will we do it or not?

Christian history is full of women and men who stood firm and did not capitulate to the Herods of their day – not just martyrs, but ordinary people who in their own way stood up to destructive powers in obedience to a higher call.

This year, 2018, new Herods will arise and maybe some old ones will return – personal Herods who want to destroy individual lives or macro-Herods, whose selves are so huge that nothing else matters in the world.

When these things happen, stand firm. Listen to the dream. Go where it tells you. Do not tarry. Do not be afraid. Be Epiphany people.

~Sister Joan Sobala
Posted by The Sisters of Saint Joseph at 7:05 AM No comments: