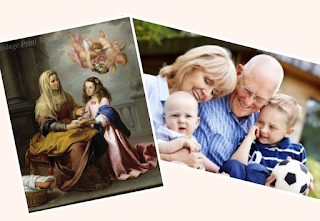 Grandparents have come into their own in our time and place as a major influence in the lives of their grandchildren. Grandparents cheer the young ones on, sometimes raise their grands, and are certainly full of stories of their grands, complete with photos on their cell phones. It seems fitting then that, in the height of summer, the Church celebrates the feast of Saints Joachim and Anne, the parents of Mary and the grandparents of Jesus (July 26 in the USA, July 25 in Canada).

We don’t know much about Joachim and Anne, except from stories that circulated about them. One version says that before he went off to pray, Joachim was considered sterile. Afterwards, he and Anne had Mary, and when she was three, they presented her to God in the temple of Jerusalem (Feast of the Presentation of Mary, November 21). It is said that Joachim died when Mary was little, and eventually, Anne remarried. Anne continued to be devoted to Mary, and in the images of the two of them together that have come down through history, Mary is always standing at the side of Anne who is teaching her to read. Quite remarkable when we consider the age in which they lived.

Pope Francis has taken the natural affinity that exists between grandparents and their grands, and has encouraged their roles. “(Grandparents) have the strength to leave us a noble inheritance…they transmit history…doctrine…faith and give it to us …passing on the human and religious heritage which is essential for each and every society… Grandparents’ words have something special for young people. And they know it.”

Pope Francis also gives grandparents and the elderly some instructions. He tells them “talk to your children, talk. Let them ask questions…You are an important presence, because… you witness to the values that really matter and which endure forever.” And of course, the Pope asks grandparents to pray for their grandchildren, invoking Saint Anne in particular ”Everyone ask Anne to teach us to be good and wise grandparents.”

Today, if you have a chance, think about your own grandparents and what each of them has meant to you. What have they taught you? What kind of person have you become because of your grandparents?

And if you have children, what have your parents been to them?

Today, say the names of your grandparents one by one. Tell them you are grateful for them. Whether they are living or dead, ask them to be with you, to hold you close to lead you to the Lord.


~Sister Joan Sobala
Posted by The Sisters of Saint Joseph at 5:36 AM No comments: