Reform: Walk with him toward the Light 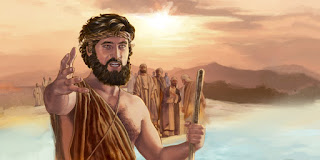 What would you do if John the Baptist appeared in your world today? Would you be drawn to him as an attractive figure? Would you welcome him if he knocked on your door? More than likely, not.

On the surface, he was an odd man – off putting, unkempt, wild looking. He cared neither about food or fashion. John appeared briefly, spoke forcefully, baptized humbly, died violently.

For many, that sums up John – a fleeting figure in the dustbin of history. But the man and his message are deeper than this passing glance. For Christians, he is a challenge worth engaging.

First of all, consider the man. Each of the Gospel writers presents John in the shadow of Jesus. He was a lesser light – a messenger. How hard it must have been for him – strong,  yet clearly second. Or which of us, having carefully cultivated a group of followers could watch them walk away to follow someone else? By modern standards of success, John was a failure. He died not knowing whether what he said or what he did would bear fruit.

Secondly, consider his message. The message of John can be summed up in one word: Reform. Reform is a time for decision, not apathy, or indifference or mere comfort. The message “reform” can also be translated “Transform your lives.” John doesn’t mean simply change the way you do things. Instead, he means  change your way of thinking and that’s so much harder. Change your way of thinking toward people in need, toward clients and terrorists, toward people who stir up prejudice or dislike in us.

No excuses! It’s not enough that we are Catholic or that Uncle Harry is a priest. Reform is a work that needs our personal attention. And if the reform/ transformation of our life is to be real and lasting, then we must believe we are capable of reform, by activating the wisdom and knowledge – the virtues -  that have been given to us. We also have to believe that the impossible is possible. We can put our hand in the adder’s lair and come out unscathed. The adder will not overpower us. But it’s not all up to us. We  need support and encouragement in our attempt to reform. We can’t do it alone. Paul urges us to accept one another as Christ accepts us. And finally, to sustain the reform of our lives, we need to turn to God in prayer. With God this Advent season, we can turn from being overwhelmed by darkness to seeing that light truly diminishes destructiveness we find in darkness.

This Advent, take John the Baptist by the hand. Walk with him toward the light.

-Sister Joan Sobala
Posted by The Sisters of Saint Joseph at 10:40 AM No comments: