Seeing the Transfiguration in Others 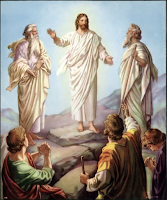 The Feast of the Transfiguration is usually buried on a weekday in the dog days of August, so it goes by generally unnoticed. But not this year. This year, the feast is on a Sunday, and this will allow the worshipping community to savor it, wonder at what it bids us to see when we look upon the face of another. Matthew tells us that the face of Jesus shone like the sun. (Mt.17.2) Not only was Jesus radiant, but his disciples were caught up in that radiance. Transfiguration happened in Jesus and it happened in the eyes of the beholders. It was an unrepeatable moment when God’s presence was made known.

Perhaps you can remember times and situations when people’s faces were radiant – the joy on people’s faces who have been reunited after a long separation, the radiance on a woman’s face when she has given birth. I once watched a man carry the cross in a Good Friday prayer service. His face already carried upon in the anticipation of Easter. Neither you nor I might directly associate God with what we see in another face. Be that as it may, God’s glory is written on that face.

In some ways, we contribute to the process of transfiguration in others, just as, at times, we contribute to their disfiguration. We can inspire a transfiguration by making loving use of the power we wield with those around us. We can bring a moment’s freedom to those whose faces have been closed, hard or masked with indifference. We can bring a glow of dignity to those who have been humiliated, a realization of worth to those whose faces reflect a belief in their own worthlessness.

Ironically, we remember on this day of Christ’s transfiguration the annihilation of Hiroshima, Japan, and a few days later, Nagasaki. More than half of each city was destroyed by American atomic bombs. Civilian casualties were enormous. Survivors were disfigured in body and mind.

The story of massive violence against people has been repeated since then in terrorist attacks and disfiguring chemical warfare. We may think that we can do nothing about the pain human beings inflict on one other, but we can. We can reach out across the mystical miles and draw those who are suffering into the arms of Christ. We do this by joining our will to the will of Christ. Once we see – really see by the power of the Light of Christ, we can no longer participate in the disfigurement of others. Let it be so for the nations! Let it be so!

Reading on in each of the Synoptic Gospels, Jesus came down from Mount Tabor and was immediately confronted with a distraught father and his child in great need. Jesus attended to both the father and son.

I hope that, as we look at the faces of the people who come our way all year long, we really see the transfiguration that makes them radiant and the disfiguration that holds them in irons…that we see and act in healing/supportive ways even as Jesus did when He came down from the mountain.

~ Sister Joan Sobala
Posted by The Sisters of Saint Joseph at 7:26 AM 1 comment: