Creating a Culture of Encounter 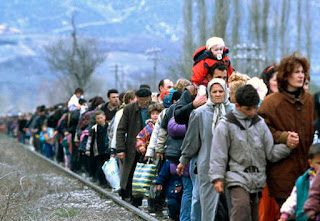 The Feast of the Epiphany is the first manifestation of Jesus to the Gentiles – that is to say to the world at large. Three mysterious wise men from the East found their way to the house in Bethlehem where Jesus lived as an infant with Mary and Joseph. The story and the symbolism appeal to us: the star, the dream, the gifts, even to some extent, the daring of these figures to strike out into the unknown. They were, if we can use the analogy, the first Star-Trek team. They are a part of God’s love story with people. We are the reason he sent His Son; we are the Irish, the Italians, the Poles, Germans, Africans and Hispanics, Arabs, people from every country on earth. Epiphany is the Feast of God in Jesus holding us close. After the wise men left, the Holy Family took to the road, under the cover of darkness, to escape persecution.

The story of the Epiphany and the Flight into Egypt make us think of today’s people traveling away from persecution and helplessness toward safety and a new life. Their tragic stories fill our daily news, almost to the point where we can hardly tolerate the misery we see.

For nearly 50 years, the United States Bishops Conference (USCCB) has used the power of the biblical stories of the wise men and the flight into Egypt to put before us the circumstances confronting migrants, including immigrants, refugees, children and victims and survivors of human trafficking. Thomas Merton, who died long before our current human flight across continents, could reflect on the plight of these brothers and sisters in words that apply today. “With those for whom there is no room in the inn, Christ is present in this world. He is mysteriously present to those for whom there seems to be nothing but the world at its worst.”

Pope Francis calls us to create a culture of encounter and in so doing to look at and touch in some way the people moving across our world, to hear their stories and help however we can. “For me,” Pope Francis says, “the word is very important. Encounter with others. Why? Because faith is an encounter with Jesus, and we must do as Jesus does: encounter others.”

We don’t have to go far to have such encounters. One night last week, some friends and I were having dinner in an Indian restaurant. We did what we always do: talk with the wait staff. That night, there were Afghani and Indians who brought bread and steaming hot food. But the person who caught our attention was a young woman from Nepal who told us pieces of her own story as she poured water and we prompted her to say more. Tearfully, she told of the mixed happiness of her marriage here to a man from Nepal and their ardent desire to go home. But there is no work for him there in his field.

Here’s another encounter you won’t want to miss – an Arab-American on a city street in the United States who writes a message for passersby to read and encounter him as he stands there vulnerable and deliberately blindfolded. Go to https://vimeo.com/193125533.

Epiphany reveals to us that the unknown – that which we dare to encounter on our way to our destination – can hold God. May we have a year of openness to such touching encounters.

~ Sister Joan Sobala
Posted by The Sisters of Saint Joseph at 6:44 AM No comments: