Celebrating Our Ancestors in Faith 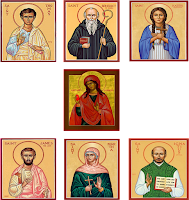 This summer, I've been invited to four birthday celebrations – a 70th, 80th, 85th and 88th – celebrations for women and men who have lived life wholeheartedly and who have come to this day through their own share of life-shaping suffering as well a deep down delight. We celebrate with the people we love.

There’s another group of people to celebrate this month – people whom we seldom think of – namely the saints whose feasts appear in our July calendar. They are among our ancestors in faith, and could be numbered among our friends, if we learned about them and brought them into our consciousness.

We remember Thomas the Apostle (July 2) who, before Jesus’ passion exclaimed to him: “Lord, we do not know where you are going! How will we know the way?” Thomas inspired this response from Jesus – “I am the Way, the Truth and the Life.” After the Resurrection, Thomas desired to touch Jesus’ wounds, before he would believe.

Benedict, twin to Scholastica, lived in the sixth century, the founder of the Benedictine Order of women, men and oblates that exists to this day. The Rule that Benedict wrote was mild, balancing work with prayer, and full of hospitality. No wonder Dorothy Day became an oblate, for all these things appealed to her.

We remember Kateri Tekakwitha (July 14) born in the Mohawk Valley Region of New York State. She was an Algonquin-Mohawk, who bore the scars of smallpox on her face growing up, but inside, she was beautiful, and remarkably close to Jesus. She became Catholic, which was a source of conflict with her people so she moved to Canada, but never let go of the Lord. She died at 24. Shortly after her death, her scars disappeared.

Mary Magdalen‘s feast is July 22. She, who was called the Apostle to the Apostles, was often confused with the adulterous woman in John 8 and called a prostitute. She was none of these things. Only last year, Pope Francis raised her special day from a memorial to a feast, making her position among the holy ones the same as Peter and Paul and the other Apostles.

James (July 25), brother of John, was another Apostle. What wisdom he must have had, what depth and love of God that he was named the first Bishop of Jerusalem.

Martha (July 29), sister of Lazarus and Mary (not Mary Magdalen), appears twice in the Gospels – once as the counterpoint to her sister Mary, and once at the time of the raising of Lazarus, when she made the same profession of faith as Peter had elsewhere.

Finally, on July 31, we celebrate Ignatius of Loyola, founder of the Company of Jesus, which we call the Jesuits. After a desultory youth, he was touched by God, went to Paris to study in the 1530s. There he met the men who would be the nucleus of his company. To this very day, Jesuits are called to educate the young across the world, and to do mission work in its many forms. Pope Francis, himself, is a Jesuit. It is in his heart.

During this month, mostly biblical men and women are remembered, but also strong founders of religious orders and lovely Kateri, who stands alone, apparently small among these giants of church history we celebrate this month. She belongs to Christ and to us is the very way the others do – our brothers and sisters in faith and beloved of God. Let’s celebrate them with our friendship because of all they dared in response to God’s call. They are good models for our daily lives.

~ Sister Joan Sobala
Posted by The Sisters of Saint Joseph at 8:18 AM 1 comment: