Lent: Fasting and Following the Lord: Some worthwhile ideas 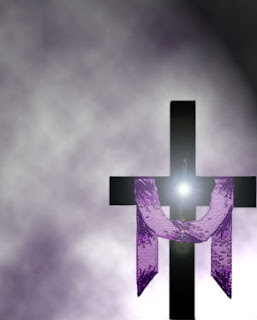 Lent begins on Wednesday, all fresh and new. I hope you have some good, simple ideas to draw on that can help Lent be fresh even a month from now. Here are two short pieces that others have written which I have found helpful in past Lenten times. You may want to weigh the ideas within them for their worth.

The first is an excerpt from the Abbey of the Arts by Christine Valters Paintner. She says, and we can echo

This second piece is from an unpublished  article by Rochesterian  P. David Finks;

“Lent is the time for getting into the habit of following Christ, but never letting following
Christ become an empty habit…following is not easy business.  It requires a tranquil
and trusting spirit…In order to follow, you need to be free from the bonds of any place or
time, you need to be free from the chains of possessions or habits, you  need to be free
from the shackles of selfish expectations…Jesus walks into the place where we are and
says ‘Follow me.’… Right here, right now, in the midst of the everyday facts of life. His call
is that we follow him into all the broken places of life to renew and make them who call is
still hard, and his call is still easy to evade and avoid…Yet hearing that voice speak your
name, saying ‘Come, follow me,’ you can do nothing else but lay down control and
selfishness and all your self-absorbed fussing, and take up the cause of this stupendous
stranger whose mission is light and life and love. Lent means following  Christ – trying to
express in our lives the same kind of reconciling love he did.”

Fast and follow – two loaded words to imprint on the inside of our eyelids so that we see them every morning as we are struggling to wake up. Lenten words to live by: Fast from the destructive interior motor that drives us – literally drives us into not seeing Christ and not hearing his call to follow him.

I wish you a slowly unfolding Lent which promises the companionship of Christ daily.

~Sister Joan Sobala
Posted by The Sisters of Saint Joseph at 8:08 AM No comments:

Do Not Strike Back 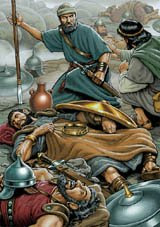 If the name Abishai was called for on the Jeopardy category “Biblical Figures”, most of us would probably miss the answer. Abishai only appears once  - in 1Kings - as David’s military advisor. But obscure as he is, Abishai lives on today.

Here’s the backstory to today’s reading from 1Kings.

The older Saul and the still young David were in conflict, battling over a kingdom. Saul was about to kill David, when David fled, with Saul’s army in fruitless pursuit. As our reading today unfolds, David has a stroke of luck. David and his friends come upon Saul, asleep, unguarded and defenseless. “Kill him,” Abishai whispers to David. But David refuses. Saul is his king, the Lord’s anointed. Trusting in God’s wisdom and power, David leaves Saul to God to deal with. But David did take Saul’s spear as proof he had stood over Saul and had a choice to kill him or not.

Can you imagine how Abishai might have reacted to David’s refusal to heed his advice? “What kind of fool are you, David? Saul would kill you if he could. If you don’t kill him first, he will do away with you. Act now, David! Here’s your chance. Kill Saul! ” Later, David would tell why he didn’t follow Abishai’s advice. David chose to be guided by mercy, justice and compassion. Saul, in turn, moved by David’s thinking, entered into a kind of peace with David.

In today’s Gospel, Jesus stands with David over against Abishai. Jesus, too,  urges his followers to choose mercy, justice and compassion when dealing with conflict. Teaching his followers a Godlike generosity, Jesus wants us to do  good to those who have done evil to us.

How hard it is to break the cycle of violence, hatred and evil by returning compassion for violence, love for hatred and good for evil. What a challenge it is to live this way.

Abishai is alive and well in our world today. Is it his voice, urging you onto strike back,that you listen to? Who is the mentor of the moment who seems to have the answer that will solve everything? Today’s Abishai, cloaked in modern terms, tells us that unless we attack those who attack us, all is lost. Jesus and David would have it otherwise. They resist the undertow of revenge and tell us to do likewise. These readings are a lesson for world leaders about how to treat their own people as well as their enemies, but they are also a lesson for me. How about my own tendencies to be aggressive and violent in my personal relationships? My own ways might be more subtle and calculated, but Abishai whispers in my ear too. Abishai becomes active in me when I strike back against those who harm me.

Begone, Abishai. Come to me, Jesus. Stand with me, David.

Help me not to judge, or condemn, or find novel ways of striking back.

Help me to pardon, give, love, forgive, be compassionate and just.

Posted by The Sisters of Saint Joseph at 4:27 PM No comments: