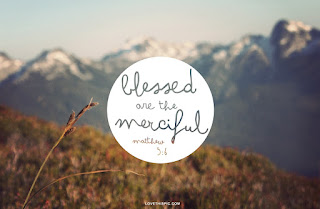 First and foremost, it is God who offers the world mercy. God does so, because it is in the very nature of God to be merciful. God can do nothing else but be merciful. You and I, in imitation of God, are called to develop mercy as a way of being, thinking and acting in our everyday lives.

It takes effort and courage to follow God’s example offering  mercy, not judgement, not condemnation,  to others, who have fallen in some way, or whom the Law says have fallen or whom we think have fallen. Mercy is not what comes to mind when faced with people who are not law-abiding, or who don’t belong. We figuratively cross the street like the priest and the Levite, leaving the injured man by the wayside. But the Good Samaritan was merciful to the injured man, and the world continues to find his generosity of spirit worthy of imitation, though very hard to do. Mercy leaves no one behind.

German-born Cardinal Walter Kasper, one of the more vocal members of the Extraordinary Council on the Family, spoke at Catholic University of America last year. He included these thoughts on mercy:

“Correctly understood, mercy is not a yielding pastoral weakness nor is it a softening agent eroding God’s dogmas and commandments. Mercy is itself a revealed truth and can for that reason alone not be played out against the truth. It does not abolish justice, but outdoes justice. Justice is the minimum of mercy we owe to one another; mercy is the maximum of justice of what I as a Christian can do for another human being who needs me. It is more than pity; it becomes concrete in active engagement for others… With mercy as the key word of the pontificate [of Pope Francis,] the question of the Church too is redefined. When Jesus says we are to be merciful like our father in heaven (Luke 6.36) that applies not only to the individual faithful but also to the Church as the communion of believers.”

As the Synod on the Family moves through various stages of preparation for the October 2015 meeting, watch for the ways in which hierarchy, theologians and the People of God struggle to be merciful with the alienated, the hurting, the distant, the left out. It isn’t easy. Of the 62 issues discussed during the Extraordinary  Synod last year, only three did not have two-thirds support: divorce and remarriage, cohabitation and homosexuality. These are all against Church Law - thorny issues that defy easy solutions. Yet Pope Francis, during a Lenten  Penance Service at St. Peter’s  last March, reminds everyone that ”No one can be excluded for God’s mercy.”

It’s frankly around these three issues that families can be divided, and family members judged. Both Church and families need to be pastoral in their approach to people whose lives and goodwill have taken them in directions traditionally unsupported by these institutions (family and church) upon which they have depended.

I recently studied a letter from the Hindu father of a man who wishes to marry a Christian woman. The letter of the father was full of anguish and disbelief. He cannot forgive his son for his choice of a wife, for the father’s hurt is soul-deep. This issue of mercy is not just Christian. It pervades the human family. We must be soul mates with all people in our expression of compassion and mercy.

Pope Francis has designated 2016 as “The Jubilee Holy Year of Mercy.”  No one is excused from the work of becoming merciful. Be merciful, as your father in heaven is merciful.

Posted by The Sisters of Saint Joseph at 7:54 AM No comments: