The Power of Symbolic Gestures 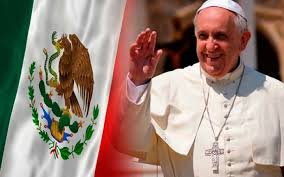 
Pope Francis is in Mexico this week. Watch him carefully. His words will be important, but more important, I believe, are his symbolic gestures/actions in the places he visits, among them, Chiapas, one of the poor states of Mexico that has been subject to the brutality of powerful forces over the years. He’ll stand at the Mexican-US border, his presence a hope for all who want freedom from fear, freedom for life.


You’ve heard the words of Saint Francis of Assis: Preach always. If necessary, use words. That’s what Francis does. On his first trip after being elected, Francis  went to Lampadusa, an island off Italy’s mainland where refugees were brought, some dying on the way. Francis went there, prayed and threw a wreathe into the water in remembrance of all who died. Then he celebrated Mass on the shore. The cup he used for the Eucharist was made of wood salvaged from  a refugee-laden  boat that broke up on the offshore rocks.


Remember this photo of Francis taken in St. Peter’s Square? Francis hugged, held close for long minutes the lumpy, misshapen face of a man who had disfiguring disease. Francis did not turn away from him or stare in revulsion as others did. Who had last held this man’s unappealing-looking face  close?


We do not always recognize or appreciate the power and impact of symbolic gestures. Here’s an example of a multi-leveled, intertwined set of symbolic gestures. As a gift, I recently gave a friend a cutoff from my mother’s crown of thorns, a floor to ceiling plant which is now 43 years old. Since then, this friend has been diagnosed with stage four liver cancer, and is undergoing treatment. Last week, her husband came home with a sun lamp for the crown of thorns to help it through a bleak winter with sparse light. How many gestures of support and connectedness are in this simple story!


Children seem to know the value of symbolic gestures. At the children’s hospital Pope Francis visited on Sunday, children shyly slipped him pictures and cards with hearts on them. Francis gave rosaries and remembrance cards. He took pictures with as many children as he could. Frequently, our newspapers carry stories of children whose generous hearts move communities to give whatever is needed so that others may live. Two eighteen-wheelers took bottled water from our area last week, because a Webster boy’s heart was moved to do so. Symbolic gestures soften the harsh and difficult times of life.


Watch Francis and the people around you. Be inspired. Weave the power of symbolic gestures into your daily lives. I’ll do the same.

There is a boy here who has five barley loaves and two fish;


but what good are these among so many? (John 6.9)
~ Sister Joan Sobala
Posted by The Sisters of Saint Joseph at 7:33 AM No comments: