Relate to the Cities of the Gospel 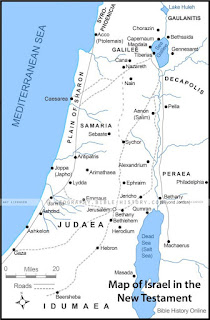 We almost always ignore the geographic references in the Scriptures as they are read at Mass. Just as we didn’t know Kabul and Khandahar until our troops were there, Scriptural geography means nothing to us until we can relate to those places. Today, I invite us to do just that. Relate to the cities, towns, and  countrysides mentioned  in the Gospel . Today, we find Jesus moving from Nazareth  to  Capharnaum on the Sea of Galilee to the rest of Galilee called Zabulon and Naphtali, and beyond.

Nazareth is Jesus’ home town – the place where he experienced the love of his family, where he grew, made mistakes and practiced carpentry. It was the place where he first became a people watcher, learning from adults and children the nuances of life.

Where is your Nazareth? Where did you learn to give and receive love? Where did you get your images of what it means to be a mature woman or man, or to believe in God? Take time later today to think of your own Nazareth…

The second place in our meditation is the seashore of the Sea of Galilee. To this day, it’s a welcoming place where fishermen work the waters. It was here that Jesus called Simon Peter and Andrew, James and John. These dedicated fishermen stopped what they were doing,” at once”, we are told, and followed Jesus. The seashore was a place of  friendship  made firm, care and concern. Moreover, Capharnaum became Jesus’ adopted home.

Not everywhere we visit in life offer us nurturing, love and friendship. Jesus  traveled  the rest of Galilee whose ancient names were  Zebulon and  Naphthali. Isaiah names the area this way  in the first reading and  Matthew repeats the name. Zebulon and Naphthali  were places where people lived in darkness and were in dire need of healing.

Where are the dark places of your life? The places that make you tense? The places where people need healing? It’s not easy to go to these places or to be with these people. It wasn’t easy for Jesus to go beyond his comfort zone. It’s even more difficult to take the warmth and confidence of  Nazareth and the seashores of our life and live them out in an unwelcoming place. Jesus did so and invites us to do the same.

Eventually, Jesus traveled into other foreign places: Samaria and Decapolis across the Jordan, Judea and Jericho and Jerusalem itself. In some places he found kindred spirits. In other places, he was rejected. Some people wanted everything he could give them. Some tried to trip him up. Others believed in him.

Always, Jesus was faithful to His Father and to who He was, to all that He was at Nazareth and the Sea of Galilee . As his followers, we are called to be no less, wherever we go across this world of ours.

Posted by The Sisters of Saint Joseph at 8:04 AM No comments: