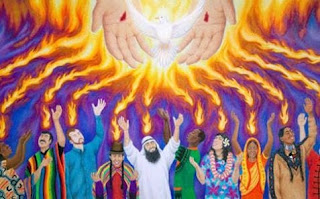 Speaking of Pentecost, we can easily be overwhelmed by the rushing wind, contagious fire and enabling Holy Spirit, that we miss one other potent aspect of the day: namely, that everyone heard Peter speaking in their own tongues – in their very own language.

There was no official language for the coming of the Holy Spirit. Not imperial Latin or universal Greek or local Aramaic or the language of the political/religious parties of Galilee and Judea.

Think about it! Everyone heard the voice of God through Peter in their own language, the language of the streets, the idiom people used, their nuances. God is revealed on Pentecost as a God without borders  –  a God who rejects sameness as necessary for everyone. There is no one right way to speak to or to be human and to be in touch with the living God. Everyone has a take on who God is and why we need to treasure and make the most of God-with-us. Everyone can ask questions of the Living God and of Jesus the Risen One. Everyone has wisdom and insight to share.

This breath-stopping thought about how God honors all existing languages in this Pentecost moment is not mine. It drifted into my computer from an unknown source and I have kept it as profound insight. The anonymous author of the article that embodied this thought put it this way: “On Pentecost, God gives the divine voice to the languages of a bunch of nobodies and a crowd of commoners. It is an act of liberation, both for humankind and for God.”

Think about the ways nations have tried to suppress the language of undesirable people. One language, those in power say, is all we need. Our language. Yet even in English, how many words have come from conquered people, indigenous people, people who have been told that their language is too much to learn. When language dies, cultures die. People whose cultures die lose heart. We have seen it and know it to be true.

Yet, “Pentecost,” again quoting the unknown author of this insightful piece, “was a rebellion against all who would seek to restrict God to a single, respectable or official language of a single, righteous   people or a single systematic theology.

Pentecost was a protest in which God refused to be silenced by the language of the powerful.

Instead, on Pentecost, God spoke. And the people in the street understood.”

And then, the people in the street spoke with the voice of God – reaching to others in word and Spirit with the very conviction of God.

Today, we pause to hear the voice of God, speaking truth in all languages, bringing comfort, light, grace and the courage to face an uncertain future, which is nonetheless, full of hope. And we are called to speak God’s word to our war-weary, hungry world.

~ Sister Joan Sobala
Posted by The Sisters of Saint Joseph at 6:49 AM 1 comment: