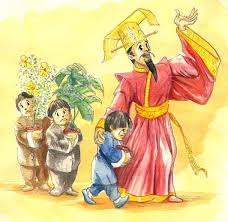 Once there was an emperor who looked at himself in the mirror and realized that he was getting old.   “I will have to find for myself a successor,” he thought. So, he called together the children of his land, and gave them each a pot filled with soil and one seed. “Come back next year at this time,” he instructed them, “and show me what you have grown.” The following year, as the date approached, little Ling’s pot had nothing to show for his efforts. Nothing. Ling didn’t want to go back to face the emperor, but his mother reminded him that he had done his best. On the appointed day, children came carrying pots with all sorts of colors and blossoms of every size. The emperor came in. His eyes took in every festive pot until he found Ling holding his pot without any visible growth. The emperor came over to him, put his arms around Ling and said to the assembly: “I gave you each a boiled seed to plant, knowing full well it could not grow. Ling was the only honest one among you. Because of his honesty, he will be the next emperor.”

The followers of Jesus are like Ling. We bear the mark of truth in our lives. In this, we are like Jesus, who valued truth immeasurably.  “Who do you say I am?” His own personal answer to that question was, “I am the Way, the Truth and the Life.” At another time, Jesus wanted his followers to know with certainty “You shall know the truth, and the truth will set you free.”

And when confronted with Pilate during his Passion, Jesus refused to let Pilate give him a title. Jesus needed no titles. He already knew who he was. In fact, Pilate missed the truth of who Jesus was, because he, Pilate himself, did not live by the truth. Living the truth gets us into trouble with those who prefer lies. Yet, if we allow him entry, Christ’s love and embrace are greater than any truth we have to face.

It’s one thing to lie to others. It’s more serious to lie to ourselves. When we lie to ourselves, we ignore the real problems in our families, among our friends. It hurts when we don’t live the truth or tell the truth to someone we say we love. It can make our body ache with anxiety.   Living the lie can not only hurt us, it can eventually destroy us.

People know when things are muddled. They can’t be fooled. The most important day of our life may be when we tell the truth and live with it.

Jesus before Pilate today, on this great feast of Christ the King, asks us the same question He asked Pilate: What is truth?

What is Jesus’ truth? What is our own truth as disciples of the Lord? Good questions for ourselves and for our Church as we end one liturgical year and begin other next week. Let’s let this be a week of truth-telling and truth-being.

~Sister Joan Sobala
Posted by The Sisters of Saint Joseph at 10:01 AM No comments: