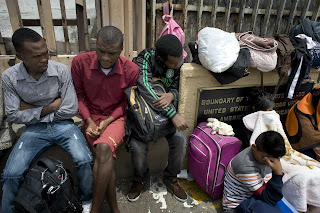 I keep thinking about the Haitians who are on the verge of being sent back to Haiti when their Temporary Protection Status expires later this month. At this very time, there are large numbers of Haitians waiting in Mexico to enter the United States, having fled Haiti through Brazil and then embarked on a long walk from Brazil though Central America. When asked about the closed doors of the United States toward him and other Haitians, one sturdy young Haitian, eating a much needed meal in Tijuana, said with a note of despair, “Life isn’t finished, but hope is.”

Last week, speaking to the world, Pope Francis urged nations to welcome migrants, refugees, asylum seekers and displaced persons in the spirit of Matthew 25. But President Trump seems to be rejecting select ethnic and national groups from coming to the USA.

How do we make our way through of all of this? As Disciples of Christ, we are called not to abandon one another – our brothers and sisters, whoever they are. And furthermore, we are called not to be passively resigned to the demonic forces in life – not to be fatalistic – but to be committed to justice and reconciliation, compassion and love.

Christians believe that there will come a time when human conflict and misunderstanding will be resolved. We call that time of lasting peace and love “the reign of God” or “the kingdom of God.”

What will the reign of God look like? Feel like? Do we know it at all in our life as we live it or are we committing ourselves to something we will never see on earth?

Yes, we do know the Reign of God in our lifetime, but it will not blossom unless we accommodate our lives to building it. We can catch intimations of what the kingdom of God will be like by studying the sights and sounds of transformation in human interactions. For example, in the last scene from Ken Burns’ Civil War series, soldiers from the blue and gray who had fought in the Battle of Gettysburg gathered together there in the late 1920s. They were all old, feeble and wrinkled. As part of the reunion, they decided to do a reenactment. The Confederates attempted to charge up the hill, but their limps and hobbles didn’t get them far. From the top of the hill, their Union counterparts left their fortifications and made their way down hill. Men from both sides embraced one another, crying and comforting one another. Together they had decided to be part of the change the world needed. A glimpse of the Reign of God.

We become part of the change the world needs by reforming our ways of thinking, speaking, and acting. By standing with the soon-to-be deported and rejected migrants, by letting our congressional delegations know we want to be a country of welcome today as we were in the past. Our attitudes turn into votes, which turn into policy, which turns into what? Life together. An intimation of the Reign of God.

~Sister Joan Sobala
Posted by The Sisters of Saint Joseph at 9:58 AM 1 comment: