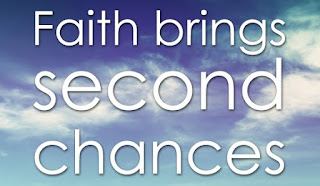 In the first reading for the Second Sunday of Advent (C Cycle), Jeremiah’s secretary, Baruch, a poet and prophet in his own right, says to the city of Jerusalem, bereft of its people: “Up Jerusalem – stand on the heights. See your children are coming back to you!” (Baruch 5.5) The exiles,  held  captive in Babylon, had a second chance. The city had a second chance. And in a real way too, God had a second chance.

And then there is John the Baptist, offering his listeners an invitation to receive a baptism of repentance. And what are the key ingredients in John’s baptism if not reconciliation with God and others – a second chance.

There isn’t one of us who hasn’t had a second chance: the near miss on the highway, the birth that eases the pain of a previous miscarriage, the disease found out and dealt with, the chance to love again, telling someone something we dread revealing and finding love in their response.

Maybe we remember being told unequivocally by someone important to us that, since we didn’t “get it right” the first time, we would be denied the possibility of a second chance.

Or maybe we ourselves have denied others a second chance – closed the door to them, so to speak, and thrown away the key.

Later in the month, when we celebrate Christ born among us, all creation, all people  have  a second chance. Our world, our nation seems to be riddled with bullet wounds. We feel as though the very goodness of life is  curdling through the violence and hatred we experience. But God does not deny our communities a second chance. God holds out to the world the same potential for conversion and transformation that is offered individuals. If God is ready to give the world a second chance, then every strategy for justice and peace is worth the attempt and every labor for the relief of suffering is worth the effort.

All of this is why Pope Francis encourages us to live every day between December 8, 2015 and November 20, 2016 in the exercise of the spiritual and corporal works of mercy. Make tangible some use your time and talents so that others may have a second chance. Then, come Christmas and the unfolding year ahead, “our mouths will be filled with laughter and our tongues with rejoicing.”(Psalm 126.2)

~Sister Joan Sobala
Posted by The Sisters of Saint Joseph at 8:47 AM No comments: