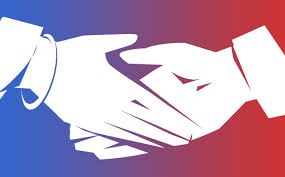 
This week, we are awash in words, and we need to be. We are a people who are trying to understand the meaning of this presidential election – deeply divided by profound sadness, fear, and even abhorrence on one side, and on the other, elated satisfaction embedded in the hearts and minds of people who believed they were finally heard. Each of us comes to these contrasting emotions side from where we stand. That’s the truth of it: we hear, we perceive, we choose from where we stand.


Listening to a variety of voices over the past few days, I heard some journalists admit they didn’t do their homework – they didn’t adequately go out to where people lived and hear their voices raised in frustration and anger. I heard some people say they were caught off guard: Who would want anyone but Hillary Clinton, with her courage, experience and convictions? But more Americans than not tipped the scales of the electoral process toward now President-elect Donald Trump.


I heard Khzir Khan interviewed early on Election Day. The anchor wanted to know if Mr. Khan had acquired a taste for politics. Would he pursue a political career? “No,” Khzir Kahn said. “But I do have 44 commitments with various groups across the country until next April: opportunities to talk about reconciliation.”


Reconciliation is not easy to come by. We must first seek out the other – the one from whom we are alienated and talk through the miseries that have divided us. That’s the first major hurdle, isn’t it? We don’t know how to talk with each other. To say where we stand and why. Too often, people who embark on these conversations only want to make their own points and not take in the meaning the other is trying to convey. That’s what made reconciliation so difficult between the prodigal son and the older brother. The older brother, who had had everything up to that point, didn’t want his brother to have everything. Reconciliation requires standing on a common ground and hope for a common good. Both sides must engage in the effort – but this week may be too soon. Grief and its opposite, the elation of victory, need to run their course.


Those of us who share the Christian tradition know, at least as a practice and tenet of faith, that we are all called to help shape the kindom (reign/kingdom) of God…a kindom of justice, peace, respect, love – a kindom where the Beatitudes are embraced as a daily way of life and the works of justice and mercy (Matthew 25) are a daily task for all of us, no matter our political affiliation. We know these, as well as we know that in our national founding documents, all people are created equal. Without doubt on my part, this election calls us to be conscious of these life-shaping foundations and to activate them with renewed vitality over these next four years.


In a reflection on the these times, my friend Bill Johnson, former Mayor of Rochester, ended with a strong reminder from the poet Maya Angelou: “You may not be able to control all the events that happen to you, but you can decide not to be reduced by them.” Will we individually and collectively make that choice?


~ Sister Joan Sobala
Posted by The Sisters of Saint Joseph at 6:50 AM No comments: