The Barren Fig Trees in Our Lives 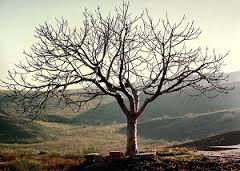 
Living in New York State, it’s probably safe to say that you and I don’t know much about growing fig trees. So, part of Jesus’ parable about the man who told his gardener to cut down this unproductive fig tree escapes us.


For one thing, the fig trees in Jesus’ time (as well as today) were treasured, carefully cultivated, fertilized, watered. Unlike the average, uncultivated tree growing in poor soil, and left largely to fend for itself, fig trees were pampered. Precious. No wonder the owner of the orchard was annoyed! He gave this tree every chance. The care he provided was useless. To put the situation into an axiom: that which only takes, and does not give can expect to be destroyed. The gardener, the hands-on figure in the story, had another thought, namely, to give the fig tree a second chance.(Luke 13.6-9)


In fact, you and I do know about barren fig trees: people in our families, those we meet in our society, our church, our town or nation or through the social media and the newspaper. Certain of these people appear to be barren, but perhaps they are not. Maybe they simply take longer to bear fruit. Faced with an apparent barren fig tree, our temptation is to give up. What’s really at stake is our patience and our willingness to suspend judgment. After all, we don’t know the moment of ripening if it comes at all. Oh, how would we like to predict it, program it, control it!


Leading up to judgments about the barren fig trees of our experience, we see signs of failure. Let’s call these signs of failure “falls”. Our society takes delight in pointing out the falls of others. Think about the relentless cameras of sports coverage recording the spill of the skater, the missed field goal, the slice into the third fairway over. These are replayed endlessly. Not just in sports but in other areas of life, people fall in a variety of ways and for a variety of reasons: infidelities, addictions, lack of discipline, bad choices, distractions. If we’re honest, people see us fall too.  Are we all bad fig trees? Who is to say? Certainly not Jesus and certainly not Pope Francis. Remember how Pope Francis echoed Jesus about holding off in much the same way? “Who am I to judge?” he asked reporters during one of his famous in-air press conferences when the question turned to priests who identify as gay?


Care is what we are called upon to give the fig trees that grow in our world. We either stand by, prune, and fertilize or we chop down or abandon what we judge to be barren.


One way of understanding the spiritual and corporal works of mercy which are foundational to the Year of Mercy is to see them as a call to care for the precious but barren fig trees of our world. On his Fridays of Mercy, Pope Francis spends time with people whom society has cast aside or judged useless. Most recently, he spent an afternoon with the addicted who are trying to make their way. With whom do we spend our occasional hours of mercy? For what fig trees are we the gardener?


This is our Jesus. He captures in this story one of the age-old tendencies people have – to judge one another worthy of being discarded. His story has another ending.
~ Sister Joan Sobala
Posted by The Sisters of Saint Joseph at 6:29 AM No comments: