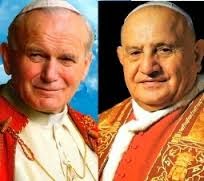 Sunday was a remarkable day in Rome. For the first time ever, two popes were canonized in the same ceremony:  Pope John XXIII and Pope John Paul II.

Most people living today grew up with Pope John Paul II. Less of us remember good Pope John, as he was called. He was pope from 1957 to 1963. If you want to know Pope John XXIII, look at Pope Francis. Francis stands, walks, teaches, embraces the world as John XXIII did.

The leadership of these two men significantly influenced modern Catholicism and our secular society. So many people have been touched by their vibrant faith. So many people venerate their names and memories. How could they  not be proclaimed saints?

Such was certainly the case for these two great men. But no two people manifest holiness in exactly the same way. (After all, God ‘s images in the universe are many and varied.) Saint John XXIII and Saint John Paul II exemplify the nuances of God in our world.

John XXIII was elected pope in 1957. He was a surprise choice for the office. To everyone’s surprise, he spoke to the hearts of the people with warmth and humor.

John XXIII set a new tone for the church focusing the church’s energies to serve the people of the day, not just replaying old glories.

He wrote: “We are not on earth to be museum keepers, but to cultivate a flourishing garden of life.”

John  XXIII was not just a friendly – neighbor type. Trained as an historian, before his election, he was the Papal ambassador to three very sensitive areas:

To the Orthodox Churches of Eastern Europe
To Turkey with its Muslim population
To France, First Daughter of the Church, as France has been called.
In each assignment, he won the hearts of the people, and was extremely effective in governmental relations which were often quite strained.

At heart, Angelo Roncolli – Pope John XXIII – was always a pastor with a compassionate touch. His pastoral advice? “ See everything. Overlook a great deal. Correct little.”

Pope John Paul II – Karol Woytyla- was the first non-Italian pope in 450 years. As a young man, growing up in Poland, he lived under Nazi rule. As an adult, he lived under Communism. The suffering he and his people experienced formed him as a man – a man without fear.That suffering fueled his heart of compassion.
So it was that he became a missionary pope, visiting 129 nations, to bring God’s message of hope and encouragement to a world often oppressed and enslaved by its own people.

Billy Graham called John Paul II “ the most influential voice for morality and peace in the last 100 years.”

On these Easter Sundays, Jesus leaves us with words to carry in our hearts – the same words that inspired our two newest saints.

The first word is Peace. Every time Jesus returned to his followers after the Resurrection, his first word was Peace. All is forgiven. All is well.

Go. Go tell the people the Good News. Death does not have the final word.

Do not be afraid. I will be with you.

As followers of the Risen One, as brothers and sisters of Saint John XXIII and Saint John Paul II, let us be at peace. Not anxious. Tell people God makes a difference. Don’t be afraid. Ever.

We have the words of the Risen Lord to go by.

Posted by The Sisters of Saint Joseph at 7:44 AM 1 comment: