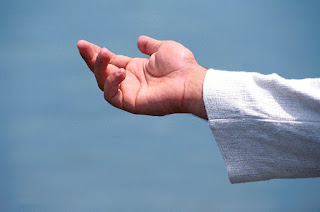 There’s a subtle little something that happens to us after Easter. What a relief! Another Lent has been negotiated in a more or less satisfactory way. Jesus is safely risen. Our catechumens and candidates are baptized and welcomed into the church. We can relax. Enjoy the blossoming springtime. Live out the rest of the year without concentrating on Christ’s passion, death and resurrection. Christ’s in his heaven, the poet says. All’s right with the world. What more is there to say?

The more is this: we are never done moving between the events of Holy Week and Christ’s risen presence. So during the weeks of the Easter Season, this blog will occasionally look at some aspect of the biblical accounts of Jesus’ last days and His Resurrection, and see that they have something revelatory to say to us in our times which are growing more secular and less convinced of Jesus’ present day reality.

In all four Gospel accounts of the Passion, it is said that Pilate handed Jesus over to be crucified. Pilate had that power bestowed on him from Caesar. Jesus, in His own way, accepted the power of Pilate over Him. Jesus did not flee, or argue or try to change things. He allowed Himself to be handed over.

There is a level of life deep within us that we are reluctant to hand over to anyone, and certainly not God – our privacy, our mistaken belief that we are the primary guides of our own lives and this has nothing to do with God. I think of Ignatius of Loyola – soldier and man of the world – who sustained a battle injury and had to convalesce in a place where the only books were about Jesus and the saints. These were enough to set him on the path to a future unlike any he had anticipated.

To what spiritual guides do we hand ourselves over? Cultic leaders who want to dominate us or guides who help us follow the unseen paths along which God guides us already?

Jesus, handing himself over to Pilate went to his death. But that was not the end, for Jesus was ultimately handed over to eternal life. That is our destiny, too.

~Sister Joan Sobala
Posted by The Sisters of Saint Joseph at 6:35 AM 1 comment: