The World Would be Better if We Try 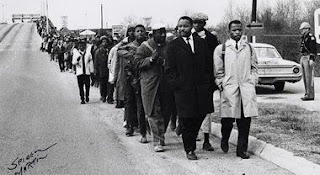 Every year, early in March, I pull out of storage the framed cover of LIFE magazine dated March 19, 1965 so my memory, sadness and ire will be stirred again.

The headline reads “The Savage Season”, and the photo shows two (of many) troopers  waiting for John Lewis,  Hosea Williams and a long stream of marchers crossing the Edmund Pettis Bridge leaving Selma, Alabama.  Moments later, the somber marchers, theirs eyes downcast and their hands in their pockets in classic non-violent posture, would be attacked by troopers and deputies, on horses and with dogs, using cudgels of all kinds to beat down the marchers on their way to the state capital in Montgomery. Later that month, at the order of President Lyndon, federal troops escorted the marchers along the route to Montgomery. In August 1965, Congress passed the Voting Rights Act to strengthen the Civil Rights Act of 1964. People who sought justice and equality were hoping for an end to racism.

But if we look at the Democrat &Chronicle for February 21, 2019, the headlines tell of increased  violence  embedded in hate crimes. Everyone is in the mix: racists, neo-Nazis, white supremacists, neo-Confederates,  anti-Semitic groups. The list is long. The march from Selma to Montgomery goes on.

Yet Jesus would have us be and do otherwise. While words like racism don’t appear in the Gospel, hatred and animosity among people who lived shoulder to shoulder are evident. None of this is of Jesus. He teaches that each life is valuable. Every person is of equal value with everyone else. No one is a throwaway.  “In my father’s house there are many rooms”  (John 14.2) - room for every person of every race, each gender, ethnic group, sexual  orientation, without exception.

In 2019, what do we need to do personally, minimally and daily so that racism gives way to unity and peace?

1.   If possible, get to know one person of color. Really know that person: his/her desires, hopes, struggles and vision of life. Let that person get to know you as well.

2.  Treat everyone you met with respect. Let it show. If that person does not treat you with respect as well, let it go. Don’t give back in kind. S/he may be living through suspicion of the other born of pain and maltreatment.

3.  Do not take part in derogatory conversations about people of color. Often these include name-calling. The “N” word. Speak otherwise.

4.  Call on God, who is the Significant Other of all of us, to help us overcome  the outlooks we have constructed to keep us and others confined to separate non-overlapping  spaces.

Try on one or more of these attitudes this Lent, and work at making it fit our minds and hearts.

Hard work? You betcha!  Worthwhile? The world will be better if you try, if I try, if we try together.

Posted by The Sisters of Saint Joseph at 5:48 AM No comments: