The Pruning of Our Lives 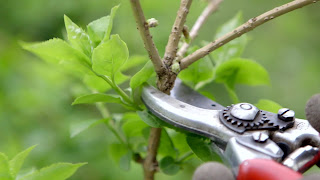 Last Sunday was a fresh spring day – the first we’ve had this year so far. I took a long walk through the neighborhood and watched homeowners rake, prune, and create piles of winter debris along the roads. One way to look at the devastation of this particular winter is to say it was nature’s way of pruning away weak or dead parts of still-healthy plants. Nature-watchers say that pruned trees and greenery fare much better than those left unattended.

People also need to be pruned, although we don’t always want to admit it. The story of Paul’s pruning is told in Acts 9. Yet even after he had well and truly been pruned, the community of believers was still suspicious of him. They remembered well how Saul had persecuted their brothers and sisters in faith. But trustworthy Barnabas introduced Paul to the community, which grafted him onto the vine, and the graft took.

One of the results people associate with being pruned – trimmed back – is a certain soppy meekness – a diminishment of zest or feistiness. But Paul was never meek – neither before nor after his conversion, so we, too, can take courage that we will be ourselves, and even better, after we are trimmed back.

Pruning is a means to an end – to increase the yield or to bear more and better fruit and an indispensable element of growth. Connectedness is another. It may seem obvious but is worth underscoring: every tendril, every offshoot grows if, and only if, it is connected with the original plant or is grafted onto another. But we know individuals and groups that separate themselves from that which sustains them. Couples split, children walk away from their families, individuals leave the church of their earlier years and choose to be isolated from worshipping communities. These things happen and separation may be the right thing to do. But not always. It takes discerning with the Holy Spirit‘s wisdom to know what to do with the separations we consider as necessary for life.

Connected to Christ and the believing community doesn’t mean we lose our individuality with all its grandeur and funny little quirks. On the vine that is Christ, the branches do not all look alike or act alike.

I know a man named Ben who had a horrendous life as a youth. Abuse and neglect drove him into crime – serious crime that resulted in years of incarceration. Upon release, Ben went back to his own city to reconnect with family and friends, but people he knew were fearful that he would fall back into old ways. They wouldn’t trust him. Providentially, Ben came across AA which accepted him unconditionally. With lots of encouragement, now years later, Ben has found himself part of a community that accepts him for all he has become. He, in turn, is reaching out to others to help them connect.

What we say we believe about the vine and the branches becomes real as we accept people not of our own choosing who are pruned by God’s grace and are ready to be connected to us in faith and life.

~Sister Joan Sobala
Posted by The Sisters of Saint Joseph at 8:49 AM No comments: